Science Magazine recently published an article called Your Brain is like a Wad of Paper. When the team at Autodesk Research saw it Jos Stam recalled that it looks like a simulation Duncan Brinsmead from the Maya team had done with Nucleus a number of years ago. 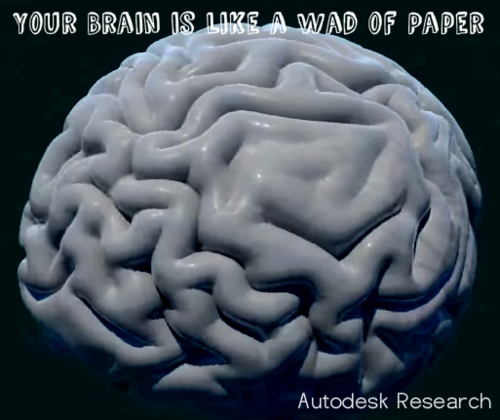 From the article in Science Magazine:

Suzana Herculano-Houzel and Bruno Mota—a neuroscientist and physicist, respectively, at the Federal University of Rio de Janeiro in Brazil—have found a mathematical relation for folding in mammals' brains that appears to be universal.

It may sound complicated, but that universal relationship is the same one that describes crumpled wads of paper—as Herculano-Houzel showed by scrunching up sheets of paper of different sizes and thickness at her dining room table and measuring their surface areas. The relationship comes about because the bent-up paper settles into the configuration that minimizes its energy. So presumably, in folding, the cortex also simply settles into the configuration of least mechanical energy.

Duncan Brinsmead says, "The process of crumpling based on surface area in a confined space is what we are simulating. However there are a lot of subtle effects that probably make our result differ."

Jos Stam adds, "It is a qualitative demonstration of the theory described in the paper. The cool thing is that Nucleus is able to show the process and the resulting shape. The brain, like a walnut, is an emergent form from basic constraints. That is what Nucleus is all about."

Here's what the Nucleus simulation in Maya looks like:

You can read Nucleus: Towards a Unified Dynamics Solver for Computer Graphics to learn more about how the Nucleus solver works and watch the video associated with Physics-based Generative Design to see some other interesting uses of Nucleus like below.