Blog Home Author Subscribe Innovation and Intrapreneurs Autodesk Research
Kitty Wins a Best Talk Award at UIST 2014
Dreamcatcher: The End of Design As We Know It?

What Does Synthetic Biology Mean to Architects?

The Bio/Nano/Programmable Matter group at Autodesk Research is working with biology at the nanoscale level, to programatically define new matter. This is called synthetic biology and they envision this science being applied to designing products, buildings and cities.

What if you could design a building that would grow itself?

Here's a short portion of a TED Talk from Mitchell Joachim looking at the possibilities.

Mitchell sets an interesting vision here. Maybe a meat house is a little extreme but it is certainly interesting to think that you could program what the R value of the walls of a house are and then you just have to plant it, add water and wait. Doors could work in much the same way as muscles in our bodies. And maybe the facade would heal itself after extreme weather.

Is it scientifically possible that a building could grow itself? How would that work?

To understand the science behind how this could work, the following video is very helpful. Essentially, DNA can be used in much the same way as any other programming language. The field of genetic engineering adds more of what we typically think of from engineering to create synthetic biology. As one could design a computer and a software program, one could also design a chair that would grow itself - the chair has the computer and the software program as part of itself.

The idea of growing plants on Mars to prepare it for human habitation is interesting. Even more so if the trees were houses. Maybe we send rockets with payloads of seeds. While the plants are growing, we could be finalizing the technology to get people to follow.

This may sound far-fetched but it is possible to order your custom designed DNA over the internet in a similar manner and for a similar price to buying books today. Consider OpenTrons, a Kickstarter project for a biotech liquid handling robot for $2000. The 20th century has been called the century of physics for all of our advancements in things like space travel. The 21st century is being called the century of biology and the dropping prices of this technology will help to fuel that.

A prime example of this comes from Autodesk's own Andrew Hessel who created and "3D printed" a virus in two weeks for $1000. Don't worry - the virus was designed to infect E. coli and is not harmful to humans.

E. coli is a common and easy bacteria to work with. Cambridge University created E. chromi that changes color based on the presence of an environmental toxin. The University of Texas and UCSF created E. coliroid that responds to red light and acts like a camera.

What does synthetic biology mean for architects and other designers?

With this vision and base on the science set, we can hear how Andrew Hessel sees this working. This interview was conducted by the popular architecture website Arch Daily. In this video, Andrew speaks to a number of things, including these questions on the future of design:

To quickly answer the questions from above, architects have a role as forward-looking thinkers. Architects design the world we live in and the tools that we need to survive in the world. As the world is changing rapidly through climate change and increasing populations our current way of life needs to evolve.

With these challenges and opportunities, you should now have a good idea of what the Bio/Nano/Programmable Matter group within Autodesk Research is trying to achieve with Project Cyborg. What kind of things would you like to create with this technology? 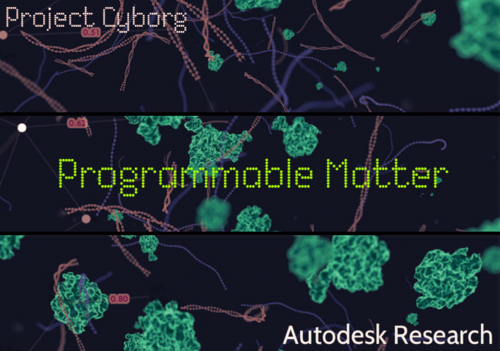